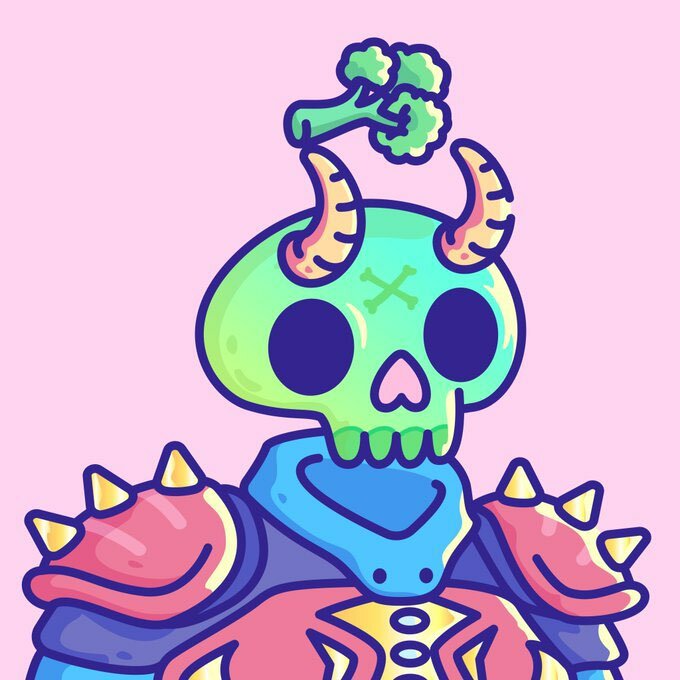 The Tasty Bones NFT project is currently one of the latest trends and most talked-about projects in any NFT marketplace. 5000 skeletons on the Ethereum blockchain with a tempting mint price of 0.069 ETH crypto coins. But what’s the deal with this bone crew and why does everyone seem behind them now? The Tasty Bones NFT is a tasteful and colorful digital art collection that has been steadily growing on social media, reaching over 250,000 followers on Twitter in just over 3 months ahead of a February 2022 launch. Let’s see it in detail.

The 5000 skeletons of the Tasty Bones project, according to official lore, “fetch food offering from the Land of the Living and deliver it back to the Land of the Dead”. This is without a doubt a cool and interesting take on the whole “gifts to the deceased” trope. Each skeleton NFT carries food or a specific meal on top of their skulls, sometimes a chicken leg, broccoli, or fruits.

The concept of the Tasty Bones NFT makes them attractive yet fun, also thanks to their colorful design. These hungry ghosts are further divided into five tiers: the community calls the first group “entertainers” and they are the funniest (and most common) of the bunch. The second group is the uncommon “fighters”, or the meaty bones, while the third, rare group is supposed to be the “runners”. Finally, we have the epic “departed” and the legendary “forgotten”.

While the lore seems skeletal, this bone crew really hit the mark with its understated style and inviting color scheme. Our compliments to the creators for creating something so simple yet so captivating to fans.

The Tasty Bones NFT’s team is un-doxxed and consists of the project lead, the artist, the community manager, and a group of developers. sTimesDistilled is the team behind this digital art collection, with Eyah as the primary artist and Evak as the community manager behind. The development team is the acclaimed NFT springboard Royal Labs, focusing on smart contract management and Web3 interoperability.

While some may be unsure whether to invest in a project where the team remains un-doxxed, the hype surrounding the project seems genuine and therefore we feel like it’s possible to dismiss the possibility of a rug pull.

The Tasty Bones NFT community members, on the other hand, are numerous and secretive. The Discord of the project is invite-only, which contributes to the sense of mystery and exclusivity. Because of this aura as well as its limited saletimeframe, Tasty Bones is definitely the NFT project one should keep an eye on.

The Tasty Bones website provides only limited information on the post-mint plan of the projects. Nonetheless, something’s definitely boiling inside these skulls! The native crypto currency of this NFT will be $TBONE, which can be earned as each Bone brings food successfully to the respective souls after a period of training and then venturing into the Lands of the Living to collect the meal. The game seems spartan but the rewards are nonetheless inviting: a 3-D version of one’s own Tasty Bone, IRL community events, and even the right to vote in the future Tasty Bones DAO.

The community is also looking forward to the pre-sale, due to happen a day before the public mint. Regarding the public sale, however, we do not have an official date yet, which could mean some serious trouble for public minters. This is especially true for Tasty Bones, as the invite-only Discord community might shut down until the public mint and leave out vital information. Many projects lately have been sold out with whitelisting pre-sale alone, meaning getting that wl spotwill be essential. After the public sale, the collection will most probably come into the secondary market via OpenSea, being an Ethereum blockchain NFT project. Nonetheless, one should expect rocketing prices there.

All in all, the Tasty Bones NFT project is undoubtedly one focusing on digital art quality and there is a high chance it will sell out thanks to early access community members’ support. The token holders might also receive tempting rewards as the project enters into its next phase and its NFT space grows. The price of 0.069 ETH is also quite reasonable also considering the hype and buzz surrounding this particular project, already being deemed the “next Doodles.” And another benefit of the low floor price is that it’s a testament to the fact that the team is committed to investing in the project and letting any holder profit. On the other hand, NFT projects with ridiculously high floor prices from the beginning give the impression that the team is after money alone and are not interested in actually building and sustaining an NFT space and related community. As the project is in its early stage, we encourage you to keep an eye or two on it – especially if you can figure out a way into the invite-only Discord!