NFT vs Metaverse: What’s the difference?

NFT vs Metaverse: What’s the difference? 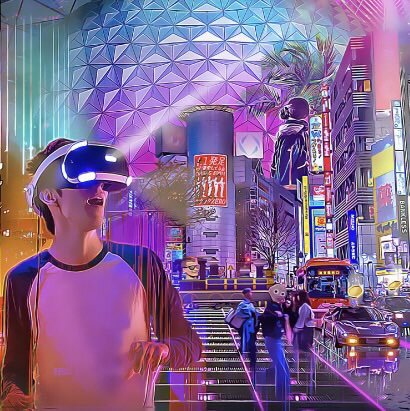 The question of non fungible tokens and their interactive operability as gateways (or gatekeepers) for the Metaverse is one of the most interesting nowadays when it comes to crypto and digital existence. The question is usually formulated as such: How does a non fungible token give access to a virtual space and act as proof-of-ownership to a virtual land in the Metaverse, and what does this mean for the internet and for augmented reality as a whole?

After all, nonfungible tokens have already found some applications within Metaverse technology and digital real estate application. It’s no surprise that a virtual world might consider giving NFT avatars recognition as keys to a digital land in token form. Moreover, non fungible tokens can act as proof-of-ownership for a digital asset that signifies membership to a specific digital community.

But what is the difference between nonfungible tokens and the Metaverse, and what are their similarities? With the advent of metaverse tokens, this distinction seems to blur. But while these two very unique technologies exist simultaneously, they also are characterized by significant differences.

First of all, a non fungible token is a tokenized virtual asset that represents proof-of-ownership while being different from the underlying digital asset that it represents. But anything can become an NFT – social media posts, music, and more. In short, NFTs aren’t simply tokenized digital art. The metaverse, on the other hand, is a promised revolution of the internet consisting on a persistent digital world divided in virtual land spaces where one can make use of digital currency and digital ownership freely.

Second, blockchain technology provides the backbone for both the virtual world and virtual products associated with it – in a way, one can say blockchain technology gives life to both nonfungible tokens and the Metaverse. Naturally, this means that each piece of NFT art and digital land is stored in a blockchain (such as the Ethereum blockchain or the Solana blockchain) that ensures their security via smart contract processes and cryptography.

Third, people are already looking at ways to increase this association. Admittedly, you can own avatars, land, digital fashion, and other objects in the proposed NFT-powered metaverse, and migrate them across platforms using your crypto wallet. For crypto businesses pushing the technology, interoperability is key: it’s not simply about being locked into a single platform from Facebook, Google, or any other tech behemoth. This also means unleashing the holistic approach that blockchain technology, crypto tokens, and the concept of virtual real estate entail… a virtual world where possibilities are endless, where second life means finding and deploying alternatives to real world systems. Virtual reality, in this sense, isn’t merely synonymous with digital space. Virtual reality could entail new possibilities for social interaction, education, civil partnership, and so on.

Fourth, there is the matter of income. Proponents of the metaverse believe it will open up new economic opportunities for both users and digital creators, whether through play-to-earn video games (like Axie Infinity), creating content and items that others can buy as NFTs, or even designing games and places that users can explore and enjoy for a fee. A crypto-powered metaverse could help the democratization of the Internet, in time providing major value to consumers instead of favoring platform operators. Moreover, each ‘blockchain game’ could be built with a specific digital currency and a specific digital world in mind, fueling the sense of exclusivity among its users, and in turn encouraging such users to act like ‘citizens’ of a shared digital space in a rational, democratic manner.

Fifth, major real world players are looking to invest in the NFT-powered metaverse. For example, in an unprecedented move, the Australian Open will be the first Grand Slam to enter the metaverse, with the first minting of AO Art Ball NFTs linked to live match data, allowing fans all around the world to own a piece of the Australian Open competition. Even Mark Zuckerberg, the CEO of Meta and Facebook, has been heavily investing in the metaverse, attracted by the marvels that each customer would experience in such a hypothetical, holistic virtual space.

Sixth, it’s not merely enterprises and companies that are looking to earn from nonfungible tokens – now, financial institutions are openly embracing the idea. The New York Stock Exchange has filed an application to register its term “NYSE” as an NFT marketplace – one that would rival Dow Jones or S&P in Wall Street. That means that every real world actor is slowly waking up to the benefits and applications of the NFT-powered metaverse.

Seventh, it’s also a matter of gaming! With the rise of the metaverse game, nonfungible tokens might become a form of membership, ability, or a digital currency within the video game itself. NFT assets and their wide operability would definitely impact the nature of online gaming, with players doubling as both users AND consumers. Epic Games, one of the largest software development companies in the world, acknowledged these possibilities when they said the metaverseoffers a multi-trillion-dollar opportunity for growth.

Eighth, blockchain technology (along with smart contract application) ensures that transactions in the NFT-powered metaverse are fully transparent and safe as long as both parties understand the terms of the exchange. As such, these technologies also motivate the parties to inform themselves and be aware (i.e. education) of their rational choices. This is an innovative development in economics and finance, as each actor, by ‘being a part of the blockchain system’, also explicitly grasps what’s at stake and what his or her rights are.

To sum up, the Metaverse and non fungible tokens will continue to revolutionize the internet, with no rights reserved to those who blindly refuse innovation from the get-go. In the future, NFT resources could become as important as real world commodities. NFT sales, as such, offer the possibility to glimpse into a virtual reality that could soon influence the physical reality we feel so attached to – by showing that decentralization works, that people can take control and secure their own rights thanks to a system of cooperation where there is no need for third-party human supervision. The metaverse and NFTs, all in all, pave the way to such understanding. As Neo from Matrix put it: